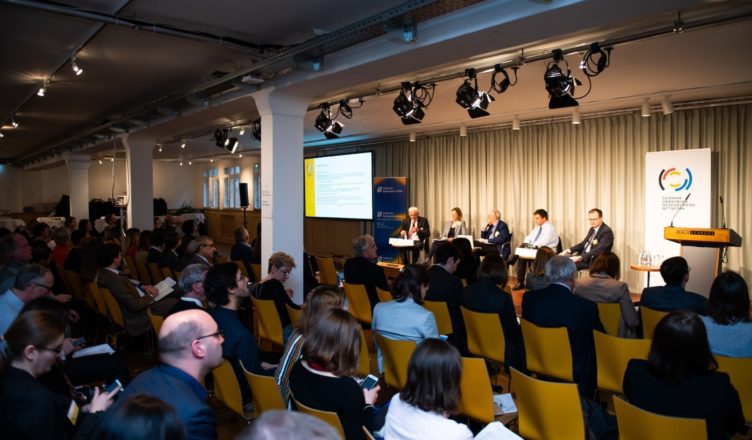 “Ukraine has never been boring, and is always good for a surprise” – in such an optimistic way “Ukraine Conference: New Government – New Opportunities?” started in Berlin on November 20, 2019. More than 120 experts and participants attended the discussion about political and economic processes in Ukraine.

Director of the Institut für Europäische Politik (Berlin) Katrin Böttger and Minister Counsellor of the Embassy of Ukraine to the Federal Republic of Germany Oleksii Antoniuk reviewed the last year in Ukraine, in particular from the EU and German perspective.

Deputy director general, Political and legal programes from Razumkov Center made a key input statement about the new Ukrainian government. “This government has a lot of opportunities, but there are some challenges and problems they face: immediate needs of people, lack of communication, war, transparency, tensions in relations with the opposition. If they learn a right lesson from this, they will succeed“.

In the first panel discussion we discussed the economic situation of Ukraine and how it can be improved. In particular: the actions of the new government in the road to land reform, the importance of developing medium-sized businesses, the ability to attract foreign investment. Experts assisted in this: Dr. Yaroslav Zhalilo, Deputy Director, National Institute for Strategic Studies, Olga Trofimtseva, former Acting Minister of Agrarian policy and food of Ukraine, Robert Kirchner, Deputy team leader, Berlin Economics, and Ute Kochlowski-Kadjaia, Managing Director, German Eastern Business Association. Olga Trofimtseva said that “The main problems of land reform are the lack of sustainability and vision of government policy, as well as the transparency of decision-making processes”. “The question you should think about in Ukraine is how to build strong middle-sized business” – highlighted Ute Kochlovski-Kadayaia.

The second panel discussion was devoted to Ukrainian foreign policy: aspects of cooperation within the framework of the EU-Ukraine Association Agreement, cooperation with NATO. Speakers: Florian Laudi, Head of the Ukraine Task Force by Federal Foreign Office, Viola von Cramon, Vice-President of the European Parliament’s delegation to the Ukraine-EU Association Committee, Dr. Andreas UMLAND, Senior Research Fellow, Institute for Euro-Atlantic Cooperation, Sofiya Fedyna, Member of the Ukrainian Parliament. Issues such as Nord Stream-2, the role of Germany and the EU in supporting Ukraine, relations between Kyiv and Moscow were discussed. Andreas Umland noted that domestic reforms in Ukraine will largely determine its foreign relations, and Viola von Cramon convinced that Ukraine has great support in the European Parliament.

During the last panel discussion, experts paid attention to Ukraine’s security policy, the Donbas war and the role of the international community in its solution. Former Minister of Foreign Affairs of Ukraine Pavlo Klimkin made key points. According to him, “Putin is not ready and not willing to take up Ukraine as a buffer zone anymore. He does not believe such model will work for him in the future ” Speakers participated: Dr. Oleksiy Melnyk, Co-Director, Foreign relations and international security programmes, Razumkov Centre, Dr. Maksym Palamarchuk, senior expert, National Institute for Strategic Studies and Gwendolyn Sasse, Director, Centre for East European and International Studies.

In the end, Yuriy Yakimenko and GURN Project Manager, Research associate of the Institut für Europäische Politik Lyudmyla Melnyk summed up the conference and highlighted the importance of such discussions for both Ukrainian and international audiences.

“There is one more thing that Ukraine needs – good news, and there is good news, and we need to talk about it” – Omid Nouripour, Chairman of the Parliamentary group of friendship with Ukraine, member of the German Bundestag.

Researchers network in Ukraine and Germany!