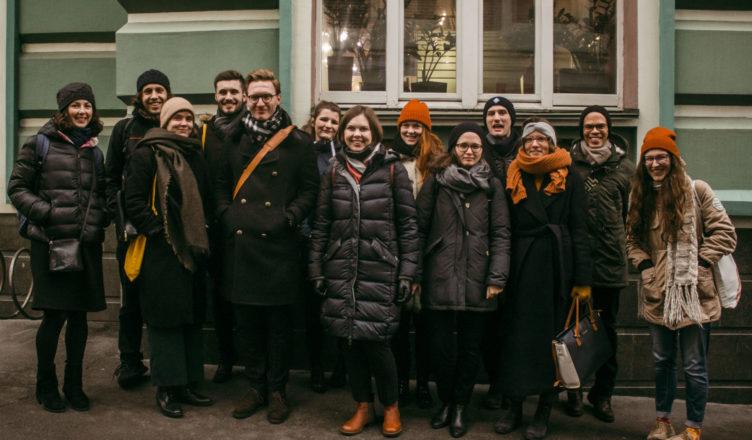 “We often think that Ukraine needs to learn from West and Europe, but in fact, I think we should learn from Ukraine”, – an inspiring phrase from one of the participants of a study trip to Kyiv within GURN project. To find out what the study trip was like and what its importance is, you can read in our material.

December 9-13, 2019 Institut für Europäische Politik (Berlin) and New Europe Center (Kyiv) organized a visit “Ukraine’s new president and parliament: post-election tendencies, policy priorities, and the civil society perspectives” for German young researchers to Ukraine. The participants of the study visit are mostly graduate and postgraduate students from leading European universities. From over 40 applications, 10 researchers were selected to analyze in detail the processes in Ukraine. Last week they became acquainted with the Ukrainian political realities after the elections.

The study trip aimed not only to give an overview on various processes, but also to consider relevant issues from different perspectives. Each day, the participants attended at least four lectures from leading Ukrainian experts; hot topics for the Ukrainian society were discussed: reforms in Ukraine, issues of association of Ukraine with the EU, cooperation with NATO, fight against corruption, settlement of the conflict in the Donbas, the situation in the Crimea; had the opportunity to obtain information directly from high-level officials, leading independent experts, civil society leaders and media representatives.

– very often, researchers are faced with insufficient data to enable them to conduct research qualitatively and to write persuasive analytics;

– sometimes there is also a language barrier. And even in cities such as Berlin, which is the political heart of Germany, there is no opportunity to learn the Ukrainian language.

That is why this study trip is an important source of information for further research by young analysts from Germany and at the same time an opportunity to bring up the issues that German researchers face in the context of Ukraine’s analysis.

“For me, German young researchers are a unique target group that, from my point of view, is ignored in Ukraine and not actively involved in exchanges or joint projects, – said GURN project coordinator Lyudmyla Melnyk. “Participants have research topics, but there is often no contact or specific data, so when we invite researchers, we give an opportunity to explore the country, work on specific topics, and thus enrich the Ukrainian discourse in Germany”.

“During this visit, I was impressed by the level of preparation of the participants: they know a lot about Ukraine, are very interested in topics related to Ukraine; some of them have a good level of Ukrainian or Russian, which helps them to get to know the country much better, – said Marianna Fakhurdinova, study trip coordinator, junior analyst and communications manager at the New Europe Center. “It is important to continue such visits, as they help to build the network itself and facilitate bilateral analytical cooperation”.

“I am in Ukraine for the first time, but now I can say that I will definitely return”, some participants noted.

Further on, the project plans include a spring school on research methodology and writing analytical materials for young researchers from Ukraine, a visit by Ukrainian analysts to Germany, breakfasts with the participation of German and Ukrainian experts. Other activities are also planned, which can be found on the website of Institut für Europäische Politik and Facebook page of GURN project.

Ukrainian and German researchers discussed how to strengthen their cooperation

The first Germany Breakfast Debate was held in Kyiv