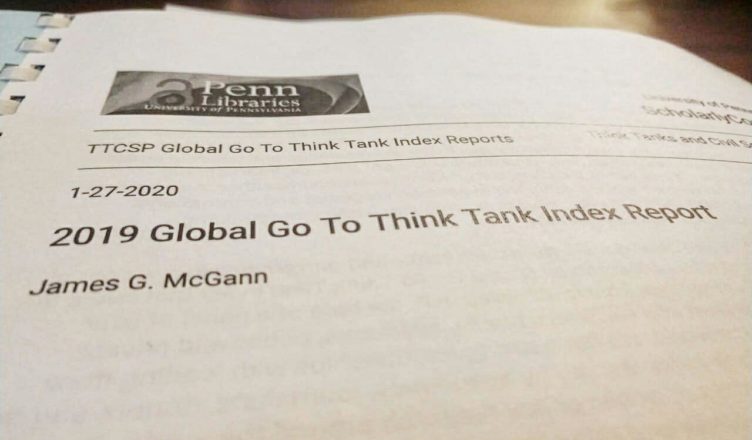 On January 30, 2019, the annual ranking of the world’s top think tanks, the Global Go to Think Tank Index Report, released by the Think Tanks and Civil Societies Program (TTCSP) at the University of Pennsylvania was published.

Partner in Ukraine Razumkov Center presented the results of the study and organized a discussion on the challenges, tasks and opportunities of think tanks. At the event, there was a proposal from the international environment to make the think tanks and analysts’ day 30 January.

In his video, Professor James McGann, author and founder of the publication, director of The Think Tanks and Civil Societies Program (TTCSP) at the University of Pennsylvania, shared his views on the development of think tanks.

“I am convinced that think tanks are critically important, but in order to remain important and competitive, they will need to adapt and transform their strategies, structures and activities. The think tanks will need to resort to new business models and the use of new technologies to create new platforms and products that can reach a number of target audiences, not just traditional target audiences and politicians. ”

For 14 years now, think tanks and civil society programs have been publishing studies that, in addition to the best think tanks identified by a specific methodology, also identify key trends in the functioning of think tanks.

Unlike previous rankings, a new category has been added to the World Index of think tanks – 2019 – “Leading think tank for artificial intelligence research”. It is also now a rule that the think tank, which has been ranked first in any category for three consecutive years, is recognized as a “center of excellence” and not included in the ranking process for the next three years. Brookings Institutions became the center of the Worldwide Center of Excellence for 2016-2018.

“We also plan to initiate a global effort to help think tanks respond to challenges and opportunities in a context where policy and funding are constantly changing,” said James McGann.

Ukrainian think tanks in the ranking

Ukrainian think tanks have traditionally been on the list of the best in Eastern and Central Europe, and the Razumkov Center leads the category:

91. Institute for Analytics and Advocacy (IAA)

Other nominations where Ukrainian think tanks are present:

2019 Best Policy Study Report Reported on a Think Tank – Instruments for Strengthening of Confidence in the Courts in Ukraine (Center of Policy and Legal Reform), Roadmap of Reforms for 2019-2023 (Reanimation Package of Reforms, Center for Democracy and Rule of Law), Shadow report on evaluating the effectiveness of the state’s anti-corruption policy implementation (Center of Policy and Legal Reform).

Congratulations to the winners! But we note that this rating shows only a small portion of successful think tanks in the Ukrainian landscape.

The study can be found here.

To see the winners of previous years, visit the Think Tanks and Civil Societies Program (TTCSP)

‘Ukraine: the dynamics of cross-cutting cleavages during quadraple transition’ in Crises in the Post-Soviet Space

Civil society and the coronavirus

Stephen Yeo, consultant at International Crowth Centre, is talking about the role of think tanks

Historian Yaroslav Hrytsak: Ukraine will not be broken, but radical reforms are needed!